The Catharine Maria Sedgwick Society was founded in 1997 when Lucinda Damon-Bach met with interested scholars at the first Catharine Maria Sedgwick Symposium; attendees at the Symposium crafted and unanimously approved the mission statement of the society. An executive committee was formed to draft by-laws and in 2000 the the first officers were elected for three year terms.

The Sedgwick Society has held Symposia in 1997, 2000, 2003, 2005, 2007, 2010, and 2014. The Society also co-sponsored the 2008 Transatlantic Women conference and the 2012 Transatlantic Women II conference in cooperation with the Harriet Beecher Stowe Society and the Margaret Fuller Society. The next Sedgwick Society Symposium will be held 7-10 June 2017 at the Red Lion Inn in Stockbridge, Massachusetts, and will celebrate the Society’s 20th anniversary.

In addition to these events, the Society maintains relationships with the American Literature Association and the Society for the Study of American Women Writers, and sponsors panels at their conferences.

For information on joining the Society, visit this page. 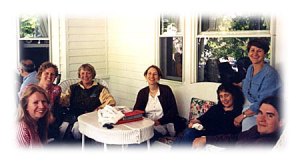 Support the activities of the Catharine Maria Sedgwick Society with an annual or lifetime membership and receive our newsletter. For more information about joining the Society visit this page.

Sedgwick in the Summer

Purchase “Stories for Children,” authored by Sedgwick and edited by Robin L. Cadwallader

All proceeds support the Sedgwick Society